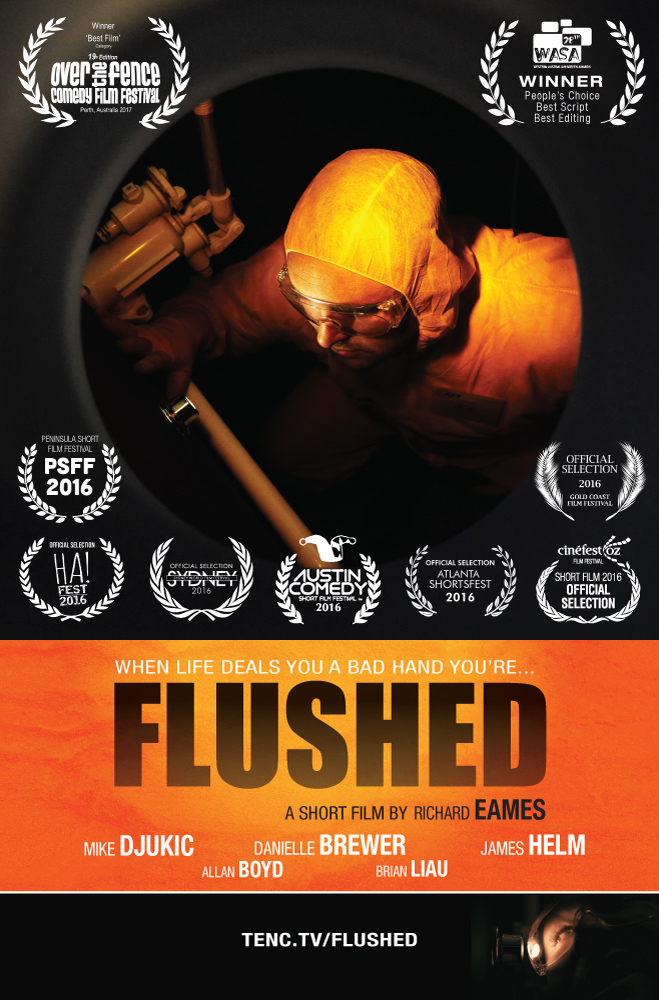 Joe, an unemployed politician, learns he must make new ‘commitments’ to continue receiving his entitlements. These commitments come in the form of one of his old policies that now threaten to send him on a humiliating downward spiral.

If my 20 year old self caught word that my 30 year old self had made a Tropfest film he might be somewhat disappointed in me. But as uncompromising as my younger self might have been I hope he would have enjoyed the resulting transgression of even his own principles.

I often need a deadline to get motivated so Tropfest acted as a good one to aim for. Also I felt up to the challenge of making a comedy as my previous few works had all been pretty serious affairs that betray the fact I do have a healthy sense of humour.

Fortunately I was able to work with an incredible team of actors, all with backgrounds in comedy, to bring the script to life and also make the shoot the funniest thing I’ve ever worked on!

In the 2014 Budget the Abbott Government tried to implement new cost cutting measures that would see anyone under 30 ineligible for welfare support for 6 months. An ill-conceived, punitive policy designed to force young people into the workplace (or crime {or worse yet, back to Mum & Dad’s}).

Unemployed people are frequently demonized in public as lazy, bludgers, and responsible for their own position in life. There’s almost an absurd belief that jobs are so easy to come by that if someone doesn’t have one then it’s by their own choice.

In truth being unemployed isn’t much fun, welfare barely covers essential living costs, and for the long-term unemployed a mounting list of job rejections crushes a persons self-worth often pushing them to give up looking for work altogether.

FLUSHED was conceived as a dark political satire of recent Government policies that attempted to punish the unemployed. The absurd (yet never too far-fetched) policy of applying for 1 job every hour, 24 hour a day, 7 days a week underlines the nature of modern welfare obligations which are designed to break the spirit and self-worth of societies most vulnerable, coercing them into accepting ‘anything’ over these new obligations.

But more simply, I just enjoy taking one person’s idea of utopia, amplifying it, and watch them find the hell in it.

Tropfest encourages entrants to shoot their films on a DSLR due to their sponsorship from Nikon, they even have a dedicated prize for Best Film shot on a DSLR. I work in post production and given the choice there is no way in hell I’d shoot on a DSLR if I could help it.

I own a Blackmagic Cinema Camera 2.5k which I’ve had for 2 years and love this thing. It’s not without it’s own shortcomings but judged on final image quality it punches way above its weight. I also own a Canon 70D and its autofocus is incredible, I love its small form and the ability to move and shoot so fast with it.

What ultimately makes it a no contest is the codec options.

Technically RAW has the advantage of a higher resolution, higher bit depth, higher colour sampling and can be pushed harder in the colour grade, but the file sizes are huge.

I won’t go into the details as there’s plenty of stuff out there on it, read my post about making Burn Again to see some of the issues I had shooting H.264 8-bit on a Canon 7D a few years ago.

In 2 years of using the BMCC I’ve only ever shot in ProRes and for many things it’s been overkill but I decided that FLUSHED was a good opportunity to shoot something fully in RAW and boy did I underestimate the amount of data I’d end up with. For a 7 minute film I ended up with nearly 1TB of RAW footage.

Ultimately I converted all this back to ProRes422HQ 10-bit at 2400×1350 to edit in a 1080p timeline and never went back to the original RAW files for the grade. I lost some bit-depth and colour sampling in doing this but honestly unless I was doing an extremely stylized grade pushing the footage to breaking point ProRes422HQ is always going to be enough.

In hindsight I might have shot in ProRes from the start as the majority of shots were scaled down 80%.

I did turn the Canon 70D for one shot though. For the peephole view in the toilets I wanted a near fisheye view but due to the BMCC’s small sensor size it is impossible to achieve a shot this wide even with a 10mm lens! The 70D has a bigger sensor allowing a wider field of view akin to Super 35mm film. To bypass the inferior compression of the Canon I installed the Magic Lantern firmware that enables bursts of RAW video recording on Canon DSLRs. If you have no idea what the hell I’m talking about this video is a good primer. With settings of 1792 x 814 I was able to shoot bursts of ~290 frames, or 11.5 seconds at 25fps.

The biggest challenge proved finding automatic flushing urinals! They’re things you’ve seen but not something one remembers where they’ve seen them. After a lot of location scouting we could only find waterless urinals. The decision was made to use some creative art direction and post production trickery to convert a waterless urinal into an automatic flushing one. The urinals and sensors were modified with chest-of-draw handles and shower head parts from Bunnings. Even our actors didn’t realise it was fake!

The urinal control room was another tricky one. My Dad helped to build us a huge wooden box to film in, one that could easily be dismantled, packed and set up on location. The individual walls could be removed to accommodate the shooting angles and because we could only afford to build one box, the wide shots of the urinal control rooms were done as set extensions in post.

Unlike many of my films FLUSHED was largely an edit job with minimal VFX. This was deliberate of course as I wanted to tone down that side of things but given I only had 2 weeks for Post it was also a blessing.

There were only two headache shots. First was the water flushing shots since we were filming a non-flushing urinal. A bit of simple editing and compositing sorted that out but getting the water to flow realistically was difficult.

Second was the tongue licking out of the wall. I’m no 3D artist but have been dabbling in Cinema 4D. I have a lot to learn in this area and for this shot I spent months trying to figure out how to pull it off. Passable as a momentary surreal image but don’t look at it for too long!

Every digital cinema camera will suffer moiré patterns to some extent. Usually you try to avoid it by not filming fine details especially patterns on clothing. It’s rarely been a problem for me on the BMCC until I went to grade the opening scene and encountered the worst moiré I’ve ever seen.

I didn’t pick up on it on set because we only had the tiny 5 inch display on the back of the camera to check footage, hey no budget for full HD monitors with LUTs on this shoot. Also due to everything being shot in a flat film/log profile the moiré didn’t stand out at all. Once I graded the footage it just popped out like I’d never seen before. The footage was unusable in this state and for the opening scene of the film it would have been a complete disaster. 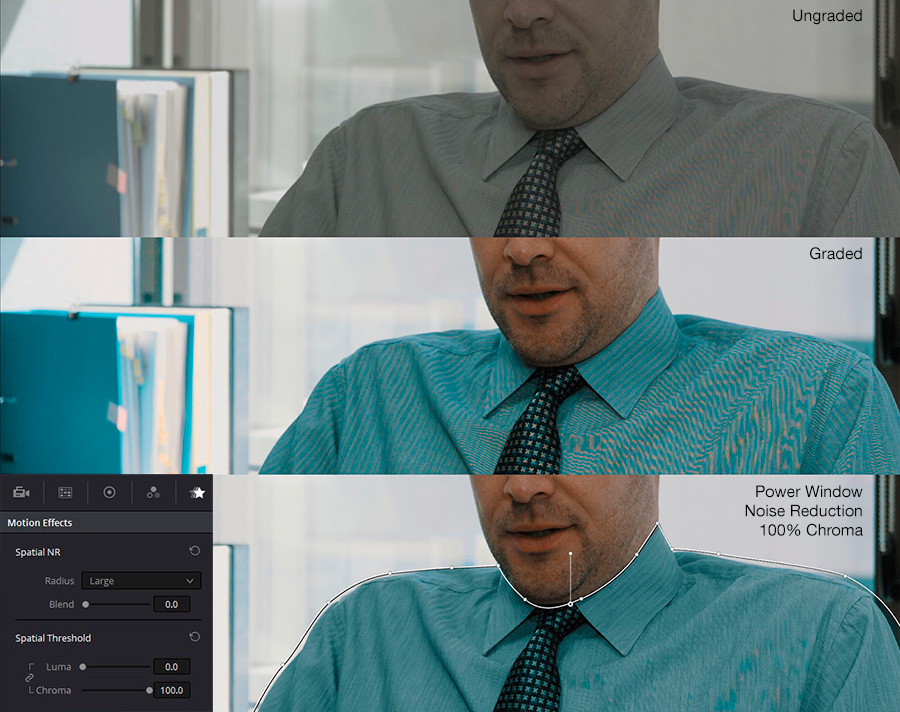 Fortunately in DaVinci Resolve there is a noise reduction tool that can help you suppress much of it. By applying Noise Reduction to only the Chroma channel and NOT the Luma channel it will act as a form of smudging that blurs out the moiré. By persevering the Luma the image still holds its sharpness. It’s not pretty but it’s effective, it won’t remove moiré 100% from your footage but it will save shots that could never be used without it. It is smudging the Chroma so apply it on a new node with a Power Window to mask only the area you need to fix.

The soundtrack prominently features Perth post-punk band blac blocs. I produced a music video for them years back, take a look here. Although I didn’t think of using one of their tracks until the edit, the way ‘Politician’ marries musically and thematically with the film makes them feel made for each other. Frontman Allan Boyd recently told me the song was dedicated to Green’s Senator Scott Ludlam.

It’s been a rough 2 years for satirists, week in week out their work was trumped by the growing ridiculousness of the Abbott Government. I thought I might have been safe setting the film a year into the future but alas nothing can turn faster than that in the political realm.

The film was written as a sort of speculative fiction, a what-if scenario that was years off, if it would even happen at all. After the first 4 days of shooting national events took an unexpected twist on 14th September with the change of Government leadership. Unbelievably the two main architects of punitive welfare policy were now ousted and a giant leap closer to being out of a job and on the AFT payroll.

We held a small launch screening on Sunday 29th November 2015 at the Backlot Studio Perth.

I’ve decided that this week is the most fitting time to release Flushed publicly. Firstly in honour of Joe Hockey who’s old seat holds a by-election on Saturday 5th December & secondly in honour of Tropfest who’s big night was scheduled for Sunday 6th December. No one could have predicted these two stalwarts being flushed from the landscape so unceremoniously.

The signature item of Tropfest 2015 was card. Joe is handed playing card stickers depicting a winning hand of a Royal Flush in 5 card poker. A Royal Flush is an unbeatable hand and is dealt against Joe at the moment the enforcer of his past policies, the Employment Agent, warns of his impending defeat.

One final irony in this story. After being shortlisted to the Top 50 I had to submit a heap of material to the organisers; Presskit etc… As a joke I included 3 of the Royal Flush stickers that Joe sticks to the urinals that we had left over from the shoot. Some two weeks later Tropfest announces it’s gone bust and everyone working for the organizer is sacked… With these stickers in hand the Tropfest organisers might be working in a urinal near you soon.